Can we forgive the past to survive the future?

This was the question Nelson Mandela and Desmond Tutu asked of the South African people after a brutal half-century of Apartheid. For a moment in time, the country said yes. From 1996 to 1999, victims and perpetrators told their stories face-to-face before the Truth and Reconciliation Commission. The world watched in amazement as the truth of a nation was placed on the table, averting an expected bloodbath. Then the headlines faded, as did the idea.

A Snake Gives Birth to a Snake follows a group of South African actors, an American director, and a legendary composer as they try to resurrect that experiment in healing before it disappears. They do so in the belief that, if people divided by distrust could listen to each other once, it could happen again. They take a theatre production around the world, to countries emerging from genocide, violence and atrocity, from post-genocide Rwanda and the war-torn Balkans, to Northern Ireland after the Troubles.

Before long, the play becomes a mirror where audience and performer find themselves confronting their past through each other’s eyes. Masks are dropped. Identity is threatened. Hope emerges, even as fear of losing hope creeps in. As they challenge audiences to wrestle with their fears and hatreds, the actors begin to question the fragile reconciliation that’s held them together 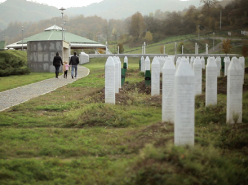 A Snake Gives Birth to a Snake