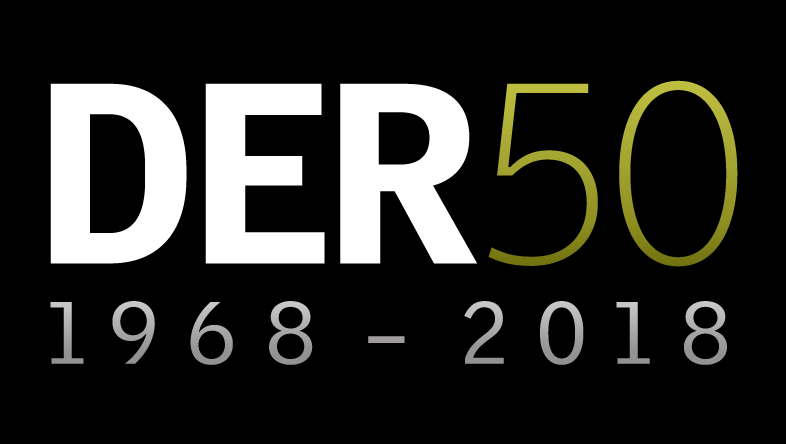 That DER is thriving, after 50 years, speaks to the strength of our films, our mission and our community of filmmakers, scholars, students, and community members. It is a powerful reminder of the importance of our work. This year we ask you to join us in celebrating our history and to help us as we look toward the next 50 years.

John Marshall and Timothy Asch founded DER in 1968 to provide new kinds of educational film for the classroom. Their vision was to go beyond the didactic slide shows and heavily narrated films of an earlier era. John and Tim, along with a cohort of other anthropological filmmakers, believed that film could be used productively both for social science research and teaching about human behavior. Indeed, the short sequence films they created from their !Kung and Yanomamö footage continue to provide students with a window onto geographically and temporally distant worlds, where they learn by observation rather than expository narration. Marshall and Asch took a deeply human perspective, portraying individuals as the agents of their cultural practices, and giving their film subjects voice, all without judgment. Together and separately they visibly explored the collaborative nature of fieldwork and filmmaking.

DER has spearheaded half a century of innovations in filmmaking and anthropology by supporting filmmakers, engaging in critical dialogues about films, and enabling the circulation of unique images. While much has changed in the worlds of film, anthropology and distribution, the films in our collection continue to be the subject of ongoing scholarship: they are used daily in classrooms around the world for teaching anthropology, area studies, political science, cultural studies, film studies and more. What this, in effect, means is that students are both exposed to the intricacies of non-western beliefs, rituals and, kinship systems and acquire the skills to analyze and understand diverse social and cultural systems. They learn about the strengths and limits of film as a recording medium, and about the politics of representing people on film.

Ethical production and preservation in a changing world

The drive to use film and audio for documenting and sharing insights about diverse people, identities, and cultures is only increasing, and in our image-saturated world, it is now easy to see images and view footage made by and about the most culturally diverse and remote communities. But these images, like those of an earlier era, all too often are exoticizing, and devoid of essential historical and cultural contexts. The works of DER’s founders, and that of other early DER filmmakers, such as Sarah Elder and Leonard Kamerling’s Drums of Winter, include landmark records of communities and lifeways that prioritize cross-cultural translation and are rooted in unique historical moments. Many of the communities at the center of these works have been irreparably changed by the incursion of global capitalism and politics, and this too is part of the story that is told.

We have, in both past and present, been committed to ensuring the preservation and ongoing accessibility of our most pivotal films and have collaborated toward this end with other archives such as the Smithsonian’s National Anthropological Film Collection (most recently in the preservation of nine of the Yanomamö films.) Our ever-growing catalogue of films embraces the increasingly accessible and sophisticated filming and audio technology to push the medium towards more immersive experiences, and to move beyond a stand-alone narrative film to include online experiences and mobile apps. Among the most exciting new developments in filmmaking since our founding has been the transformation in the cost and size of filming technologies. This has allowed filmmakers to work in smaller crews to gain unprecedented intimacy, and has made filmmaking more accessible to the broader public, including the former subjects of earlier filmmaking. The increasing affordability of digitization has facilitated our efforts to “repatriate” films and footage, making them accessible to a new generation of audiences and filmmakers from these communities.

Facing the future: A mission of stewardship, innovation, and understanding

We laud the resulting explosion of documentary production and see our next challenge to be helping people throughout the globe find and access relevant works from the growing body of ethnographic film. With initial funding from the National Endowment for the Humanities, we have begun a multi-year project to develop an online catalogue of ethnographic and folkloric film, complete with essential contextual information about the production of the works – who made them, when and under what circumstances – needed by both descendants and researchers for understanding a film’s evidentiary value. Among our other recent initiatives has been establishing in 2016 the John Marshall Award for Contemporary Ethnographic Media at the Camden Independent Film Festival to honor exceptional ethnographic work, such as A House in the Fields, which offers a uniquely subjective view of Amazigh culture through the eyes of two teenage girls. And, we continue to add notable new works to our catalogue, such as The Sound of Bells, about the language of church bells in Brazil, a practice, which has been recognized as a valued form of intangible culture.

Keeping apace of new directions in anthropology, we support, seek out, and showcase films that examine cultural hybridity, transnational flows, commodity chains, and the ongoing production of ethnic, gender, and other identities, and experiential aspects of cultural phenomena. We continue to support film innovations including work that feature deliberate types of collaboration and dialogue while breaking down traditional roles of filmmaker and subjects. DER films are essential to maintaining a robust social imagination, not only to understand other cultures, but also to create the space and potential for healthy change within our own.

In a seemingly shrinking world, in which local problems are increasingly global in nature – whether related to transnational commodity chains or climate change – the importance of deepening our understanding and ability to communicate across social, cultural and economic differences is more important than ever. Thank you for being a part of this!

We have a full program of events planned for Cambridge, New York, and California.

CELEBRATE DER’s 50th WITH YOUR SUPPORT

We are seeking 50 new donors (at $50 and above) by the end of 2018. Support DER through a donation which will go to film preservation, distribution of new works, and community screenings.

Interested in supporting our 50th Anniversary Activities?  Contact for information about corporate and individual sponsorship opportunities for both local and national events.

Thanks to our Sponsors