This poignant and powerful documentary explores the complex history of interracial cooperation, urban change, and social conflict in Brownsville, a neighborhood of Brooklyn, New York, from the 1930s to the 2000s. A case study of the tragedy of urban American race relations, the film recounts the transformation of Brownsville from a poor but racially harmonious area made up largely of Jews and blacks to a community made up almost entirely of people of color.

In the 1940s Brownsville was famous for its grass-roots integration. But it later achieved notoriety for one of the most divisive and bitter black-white confrontations in American history, the 1968 Ocean Hill Brownsville School War, in which the African-American (and Hispanic) community battled the predominantly white and Jewish Teachers Union.

Brownsville Black and White examines some of the most troubling and perplexing issues facing America and its cities and raises a multitude of discussible questions. The film will provoke reflection, analysis, and debate in a variety of courses in sociology and social issues, American history and American studies, African American studies, urban studies, race relations, cultural anthropology, Jewish Studies, and education. 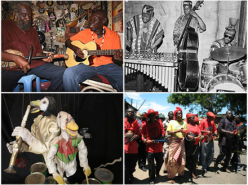