Namibian independence attracts vast amounts of international aid, but development programs no longer benefit Ju/’hoan farms. We witness the power of the “Bushman myth.” This myth – a belief that Ju/’hoansi live uniquely in harmony with nature and are born to hunt. Promised great wealth, Ju/’hoansi vote to establish a nature conservancy. When their profits are a meager 75 Namibian dollars ($10.50 US) each, Ju/’hoansi ask, “Where is all the money going?”

“This is a chapter of John Marshall’s extraordinary chronicle of modern times for the indigenous people of Namibia, the Ju/’hoansi. Benefiting from footage Marshall shot beginning in 1951, it is deeply affecting in its reflections of the personal relationships the veteran filmmaker, known as “Long Face,” has established with individuals like /Kxao Debe and /Qui, whom he knew as hopeful, newly liberated fledgling farmers, and now sees destroyed and reduced to eating seeds. Death by Myth is an exposé of the devastating effect of international aid that the Ju’/hoansi have been the subjects of since independence. Lately making their land a “wildlife preserve” for cultural tourism, in which the wildlife includes the people themselves, foundation aid is predicated on the “bushmen myth” – the happy bushmen seen in The Gods Must Be Crazy; the belief that bushmen are born to hunt and gather… ultimately, to starve. Marshall remains a broken-hearted activist for agriculture and educational.” — Judy Bloch

About A Kalahari Family
A Kalahari Family is a five-part, six-hour series documenting 50 years in the lives of the Ju/’hoansi of southern Africa, from 1951 to 2000. These once independent hunter-gatherers experience dispossession, confinement to a homeland, and the chaos of war. Then as hope for Namibian independence and the end of apartheid grows, Ju/’hoansi fight to establish farming communities and reclaim their traditional lands. The series challenges stereotypes of “Primitive Bushmen” with images of the development projects Ju/’hoansi are carrying out themselves. 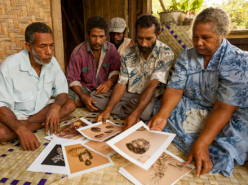