In late July, I had the pleasure of interviewing Mary Zournazi, the filmmaker behind DER’s acclaimed new release My Rembetika Blues. Rembetika music, or the Greek blues, is a music born of exile and the streets, developing its roots from the mass migration of people in the early twentieth century. By weaving together different stories of music and migration, the film documents a wealth of experiences that are often left out of the chronicles of history. Looking further into history, the film harkens back to the Hellenic traditions of Homeric storytelling. In the interview, I discuss with Mary the personal odyssey she undertook to capture this film. Along the way we discuss some of the amazing characters that appear in the film, the importance of preserving cinema as a communal experience, and the generation spanning journey of the music itself.

Below are a few highlights from our conversation. You can read a complete transcript, or listen to the full interview here: 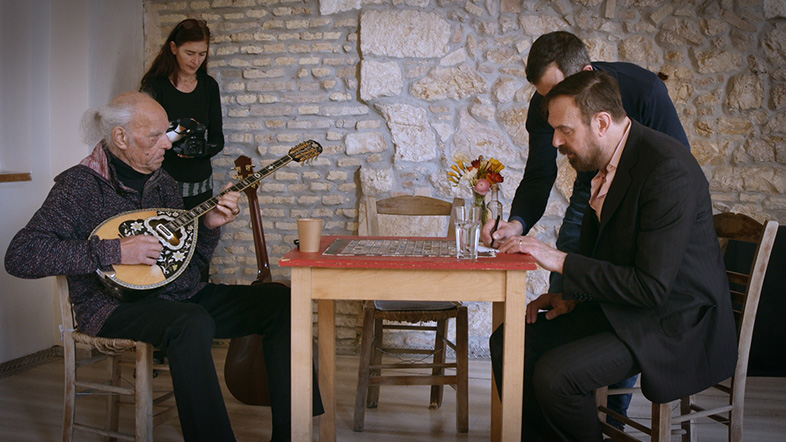 Mary Zournazi on set and behind the camera for the memorable scene with Stelios and Jim.

Seth Kurke: It’s a pleasure to meet you. And thank you for taking the time to meet me and discuss your film My Rembetika Blues. I’ve just got to say that as a music lover and someone who has traveled to Greece and Turkey, the film resonated with me despite my lack of familiarity with Rembetika. It was a pleasure to be able to learn about this style of music.

As we all know, every great story has great characters with richness and depth and complexities. Your film is no exception. One of the most interesting characters in the film was you. Could you talk about the role that you take as a character in the film and how that influenced the story’s narrative?

When I initially did the film, it had several cuts, probably about four major run-throughs. And at the fourth one, there was no real story ’cause I wasn’t actually in it. It was sort of piecing together some ideas, and the music, its history, the revolutionary aspects of it. 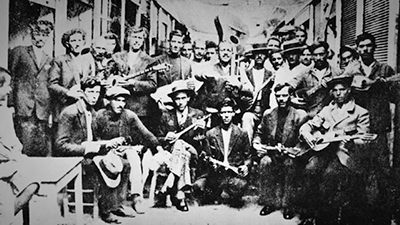 Also I wanted to draw out the cross-cultural nature of music as well. But at the fourth major cut, there was something missing. It was my history… of my grandmother and her parallel relationship to the music. So I went to Egypt and Turkey to trace that history, which helped bring a narrative arc to the film.

I see my character as a mechanism to allow audiences to connect and lead them through a story, as I did in my previous film Dogs of Democracy. It’s something that the great Agnes Varda spoke about. She sees herself as part of the work itself. And that’s how I see myself as well, as part of the work. So my documentaries and the ones that I am going to make in the future will have a similar kind of style, which allows people to get a real sense of the personal.

"But it's not only my own personal experience. It's a universal personal that's trying to connect people deeply to issues that matter. And by inserting myself as a character is one way of doing it."

SK: And it worked brilliantly.

Not to go too far off track, but part of a conversation I had recently regarding your film was your approach to having somebody, a character, that’s connected on a personal level to the story take the viewer along for the ride. In a way it is like being invited to a party where you don’t know anybody and somebody’s able to take you through and introduce you to everyone. So speaking to that, in your film you are taking us through and introducing us to some of these characters. We get to know an Orthodox priest. We have a rapper. I’m an avid record collector and to see the record store, I’m like, if I get a chance to interview you, I need to know about this record store and the owner because to me, these are the little embers that keep the flame alive, the greater flame. So could you talk about your journey of bringing these characters together, how you met them, and how they came to be part of the story you were telling?

MZ: A lot of the characters came about organically. I would run into somebody and they would say, you know, you should meet so-and-so; there was that kind of flow: where I would meet someone and then get introduced to someone else.

But then there are often random encounters on the street like the buskers in Athens, Greece. There were the four guys you see in the film, but in fact in the group there was a woman singer as well, but she wasn’t available at the time to film. Another busker in Thessaloniki I happened to run into was just singing a song and he, in a way, encapsulated everything that I wanted to capture about the music. One of the other characters is talking to him while I’m filming, and he says, “yeah, this song, you know, it comes from everywhere. It’s a folk song and everybody claims this song as their own.” That was one of the things that every character in the film, every element of the film, was trying to look at: the intercultural, amazing amount of identities or sounds or mixes of sounds or experiences that make up who we are. It doesn’t directly answer your question, but it answers one part of your question. I mean, somebody like Negros tou Moria. I came to him through a friend who said there’s this hip hop artist that is totally influenced by rembetika. And so that’s how I got to meet him. That was just by word of mouth. And then he turns out to be this incredible character. 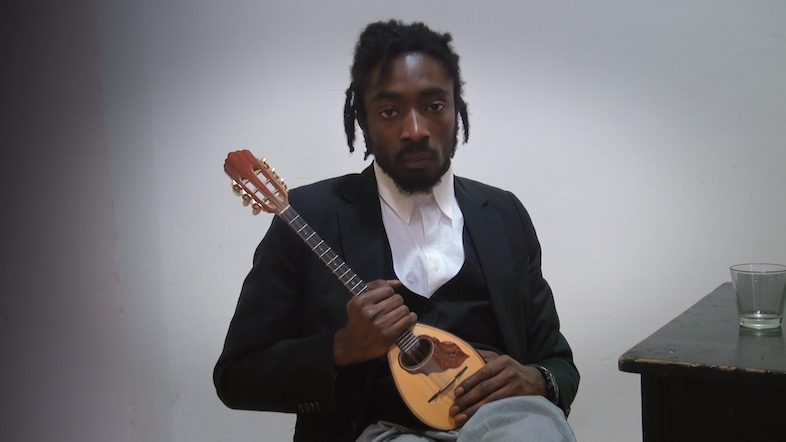 SK: You mentioned the word “genre” and applying it to something so vast, fluid and adaptable and the way that things get labeled when they’re trying to commodify it for, let’s say Amazon music. I love when there’s something a little bit deeper and richer, that can dissolve those borders, so that you can look beyond it and understand that this is still evolving. And that it also carries with it a deep past.

MZ: Many people in Greece would hold rembetika as their own, and it is uniquely Greek. And I think what I’m saying is that, of course it is. But it is mixed in with this other history. Which meant that there were a lot of Turkish, Asian, Middle Eastern sounds that, as I show in the film, the Turks and the Greeks have, sort of, always been –in a sense– at war with each other and neither would admit that they’ve influenced each other. This music is a way of sharing. Actually the music is like a child of all these kinds of cultural connections.

SK: Thinking about the film and the music, I got a sense of the great Homeric stories of the Odyssey and Iliad and it seems that in a way you were taking your own personal odyssey. But also you’re tracking the music’s odyssey as well.

Shifting gears, you mentioned Agnes Varda as an influence. Are there any other filmmakers that inspired you for this film?

MZ: There’s two great heroes for me. One is Agnes Varda. The other one is Wim Wenders who I’ve written a book with. I think cinematically, with his fiction and documentary, his style of filmmaking has deeply impacted me. Just his sense of space and capturing a kind of beauty of the road movie.  Until the End of the World is one great odyssey too, you know. That’s one great road movie. So I learned a lot from him and I’ve learned a lot through watching his films and films that he loves. I’ve had that kind of  deep connection with filmmaking from a great master. I feel very privileged to have had and continue to have this relationship.

Agnes Varda and Wim are both amazing at bringing stories that don’t necessarily have conflict in them and I’m interested in those stories that even though our lives may be full of conflict and terror and trauma and all of that, how do you bring to screen stories that are trying to heal or provide an alternative that actually enables us to understand experiences like forced migration or war. In Varda’s The Gleaners and I, the way she puts herself in the film and the story itself, which is about how much we waste and the people that are left out of societies because of the way in which capitalism works. I met Agnes in Paris actually and I wanted to make a film about her. But she really was an auteur of her own. So she didn’t want anyone to make a movie about her. Soon after, I went to Greece and saw the stray dogs. I thought, if I can’t make a film about her I can make one about something else. And that’s how I got started.