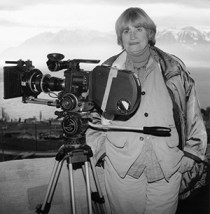 In recognition of her many valuable contributions to documentary filmmaking in Switzerland, Jacqueline Veuve has been chosen as the recipient of the 2013 Swiss Film Honorary Award, a lifetime achievement award. She will be honored at a ceremony in Geneva on March 23rd. Read more

UPDATE: It is with sadness DER learned Jacqueline Veuve passed away April 18, 2013. She was a treasured filmmaker whose body of work will preserve Switzerland’s cultural memory for decades to come. She will live on through her films.