Available on DSL and DVD: https://store.der.org/postcards-from-tora-bora-p523.aspx

At the height of the Cold War, the Osman family frantically escapes from Afghanistan while leaving almost everything behind. In the ensuing chaos, their only suitcase filled with family photos is stolen. Now after two decades of living in America, Wazhmah Osman, a young Afghan-American woman returns to her childhood home. Armed only with rapidly fading memories, she recruits some unlikely and reluctant guides to put together the pieces of her past.

On an alternately sad and humorous quest, she encounters confused cabbies, the enthusiastic former minister of the tourism bureau, a museum director that archives land mines, and a group of angry street vendors. As Wazhmah desperately searches for any tangible evidence of her former life, the journey leads her to many unexpected places. Amidst the rubble and destruction, she finds her estranged father who in the aftermath of war choose his country over his family. On the road, Wazhmah frequently finds herself at a strange intersection where cultures clash, identities are mistaken, and the past violently collides with the present.

The filmmakers incorporate recovered Super8 home movies and family photos that offer a rare and unprecedented look at 1960s and 1970s pre-war Afghanistan. Travel brochures are animated to reveal the country’s peaceful past. Drawings by orphan children are animated to illustrate the Soviet invasion and subsequent wars. Interviews with Wazhmah’s family and on the ground interviews with shopkeepers, teachers, orphans, and soldiers bring to light Wazhmah’s personal journey and the country’s current situation. 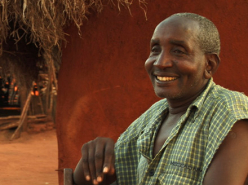