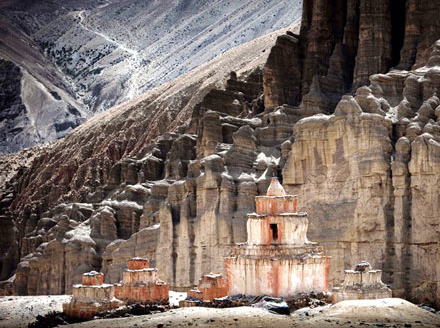 Bön in Dolpo: Ancient Zhang Zhung Kingdom — Then and Now

In 2011, after working four years, we completed our film Bön: Mustang to Menri developed around the story of Tibet’s oldest spiritual tradition, Bön, and its unique place in Tibetan history. Our film illuminated how and why the work that monks, lamas and Geshes do is vitally important in our current times. Our new film continues and deepens this work.

Our new film explores the story of ancient Zhang Zhung and Bön traditions that have persisted for centuries in Dolpo where ancient texts and practices have been preserved. Followers of Bön receive oral teachings and transmissions from teachers in a lineage unbroken from ancient times until the present day. While much in modern Bön is similar to Tibetan Buddhism, Bön retains the richness and flavor of its pre-Buddhist roots. With the help of Geshe Nyima Kunchap of Dunai, Dolpo we will investigate the importance of traditional Tibetan medicine, education, and ancient sacred sites in Dolpo and the continued importance of preserving Tibetan culture outside Tibet.

This adventure takes us into Inner Dolpo, whose remoteness holds secrets of the ancient Zhang Zhung kingdom and Bön. It will be interwoven with the story of Bön’s head senior teacher, Yongdzin Lopon Tenzin Namdak Rinpoche, the challenges he faced in leaving Tibet to help bring the teachings of Yungdrung Bön to the outside world, and his work in founding and maintaining Triten Norbutse Bön Monastery in Kathmandu.