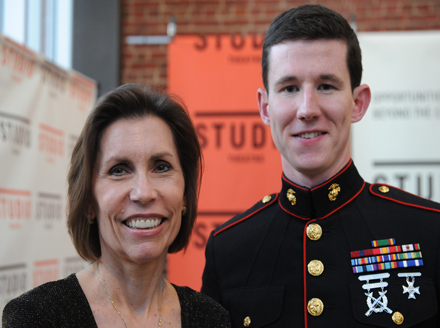 Into the Light focuses on Brendan O’Toole, a former Marine, and his struggle to adjust back home after returning from war. As he sets out to run across America to raise awareness and “to find goodness in himself,” he meets therapist Dr. Barbara Van Dahlen. Dr. Van Dahlen started a foundation offering free therapy for veterans to help them heal by sharing their stories and stop suffering in silence. As she works with Brendan and veterans across the country, she comes to the realization that she needs to share her own story. “I kept asking them to share their stories and I realized I am hiding my own. We all need to tell our stories and break down the stigma and shame which faces one in five Americans who suffer from mental health issues.” Barbara’s mother had a psychotic break when Barbara was a young girl and she has not seen her mother in 40 years. Not only does Barbara share her story publicly for the first time, she decides to search for her mother who is lost on the streets of America. Our cameras are present over the course of two years of filming Brendan’s run and Barbara’s dramatic discovery. The film will be released on PBS by Oregon Public Broadcasting in January of 2018. It will also have an extraordinary outreach component through screenings via 500 partners nationwide committed to the Campaign to Change Direction. changedirection.org It is the purpose of this film to begin to change the conversation in this country about mental illness.