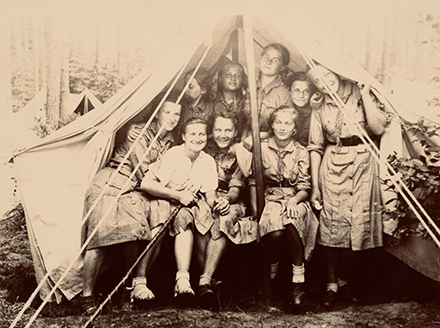 Saving the Rabbits of Ravensbrück

Filmmaker: Stacey Fitzgerald
Status: In Production
DONATE TO THIS PROJECT
DONATE BY MAIL OR PHONE

The triumphant story of how girl scouts-turned-resistance fighters who were crippled and maimed by experimental surgeries defied and outwitted the SS in the largest women’s only concentration camp in the Third Reich. Not only did the girls, nicknamed the “Rabbits,” bravely protest the experiments, but smuggled out messages written in invisible ink, unnerving the SS, who heard details of the experiments and their own names broadcast across Europe by the BBC.

The experiments were stopped, but the girls were eventually slated for execution on February 4, 1945. As the SS approached to take the girls at early morning roll call, their fellow inmates pulled off one of the most amazing rescues in Nazi concentration camp history, not only saving the Rabbits that morning, but keeping them hidden until liberation and ensuring many would survive to testify at the Nuremberg Trials. The Rabbits, however, returned to a Stalinist Poland intent on crushing those in the former Polish resistance. It would take the unrelenting will of Ravensbrück survivors, a determined woman from Connecticut, and the outraged voice of the American public to save the Rabbits of Ravensbrück once again, this time from behind the iron curtain.

From the underground resistance to the camps, the Nuremberg trials and the chamber of the United States Senate, the journey of the Rabbits highlights how women in Europe and America resisted the Nazi regime, how they risked and lost their lives to ensure justice, and how the survivors fought to reshape their world after the war.