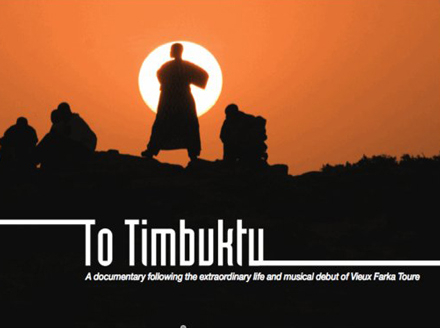 To Timbuktu with Vieux Farka Toure

Journey on a musical pilgrimage following the extraordinary life and work of Vieux Farka Toure. Born in Mali, West Africa, on the banks of the Niger River just outside of Timbuktu, in a country rich in cultural and ancestral wealth yet bound by economic poverty, Vieux is son to the late guitarist and multi Grammy Award winner Ali Farka Toure. Ali is legend in Mali and one of the most celebrated musicians out of Africa. Rooted in the traditional music from his father, and moved by popular sounds from around the world, Vieux has just made his musical debut and is now at the cutting edge of the world music scene.

We begin the journey in Bamako, the capital of Mali, where Vieux now lives (when he’s not on tour), and we’ll travel with him throughout the country by 4×4, camel and boat, into the Sahara desert just outside of Timbuktu, where Vieux will perform at the Festival in the Desert. After experiencing the music, variety of cities, people and landscapes in Mali, we’ll move to the United States. Here we’ll see Mali’s connection to American history – a story that goes back the origin of the American blues in West Africa, and the later influence of American soul music in Mali.

Today the musical connections live on through Vieux. As he travels around the world, moving audiences and critics virtually everywhere he steps foot, his universal spirit is connecting him to popular musicians from all walks of life; from NY based DJ’s that created his remix album, to American country folk musicians. Beyond a successful debut album, largely due to his ability to make music that is palatable to any ear, his increasing musical collaborations and inspiration throughout the world suggest that his music is bound for an even larger audience and world sound.

With the most frequent media images of Africa focusing on disease, poverty, violence, or an attention to culture that’s so specific that we lose any sense of humanity, Vieux’s story will show another side. To follow Vieux, we’ll experience how music is lived, we’ll see the complexities of Africa’s fight for survival in the 21st century, and we’ll learn how we as an international community are inextricably linked and celebrated through the music of Vieux Farka Toure.