By Alice Apley|Tags:Camden International Film Festival, John Marshall Award, I Am the People 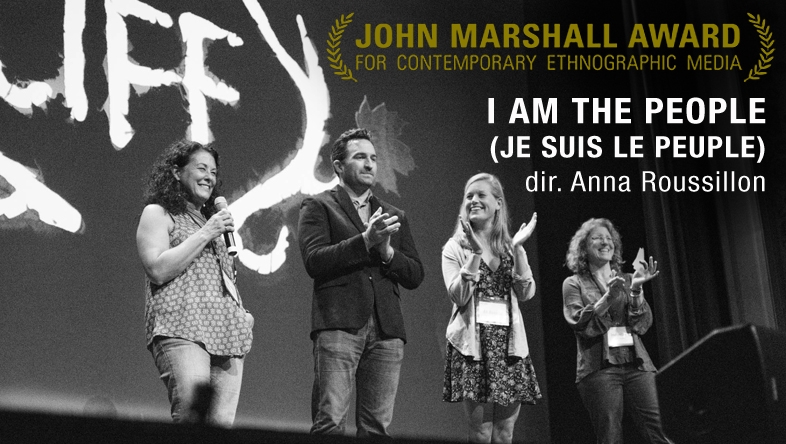 If you haven’t heard our big news yet, DER was thrilled to present the first John Marshall Award for Contemporary Ethnographic Media at the Camden International Film Festival (CIFF) this fall! We initiated the award to reinvigorate the conversation around the genre’s rich history, and to foster dialogue about the past, present and future of works that seek to document culture or engage issues related to the efficacy of film and media as a means of doing so.

Named in honor of DER founder, John Marshall, this year’s award was presented to Anna Roussillon for her debut feature, I Am the People (Je suis le peuple), as it spoke directly to Marshall’s contributions to documentary filmmaking. In works such as N!ai: The Story of a !Kung Woman, Marshall was one of the first filmmakers to allow non-western characters to speak directly for themselves. Marshall skillfully illustrated the larger social, political and economic forces without losing focus on the lives and relationships at the center of the story.

In the spirit of Marshall’s work, I Am the People portrays a rural Egyptian community’s responses to the revolution in Tahrir Square and the political aftermath. Intimately shot over three years, the film provides a rural perspective on national events. We are shown how the community follows national politics – through communal television viewing, radio and newspaper – presenting an alternate experience of the revolution, one overlooked by mass media. What emerges is a story of the experiences of those in the periphery and a complex picture of the relevance of national politics for rural lives; Roussillon masterfully captures her subjects’ personalities, opinions, and relationships with one another, while showing the community’s ties to a national economy. True to the history of the genre, the film offers insight into lives often left out of mainstream media while affording them great dignity and humanity.

DER’s 2015 award jury sought to recognize a work that built on Marshall’s contributions to the genre, particularly the humanizing and respectful relationship of filmmaker to subjects; the integration of local dynamics within a larger socio-political framework; and the innovative presentation of social and cultural content. While we at DER are in the fortunate position to be viewing new works throughout the year, convening the jury and taking the time to identify an award-winner was a unique moment for reflecting on the state of independent filmmaking, and how filmmakers today are building on the early lessons of ethnographic filmmakers. 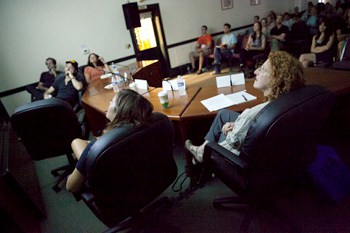 “Being There” panel at Points North Forum – photo courtesy of CIFF

And we couldn’t have asked for a better festival to premiere the award at than CIFF. Especially this year, as the festival featured “Being There,” a special program on foundational ethnographic and documentary works. Seven screenings were held during the program, featuring historical works from the cannon including titles from The Hunters to Cannibal Tours, and the works of filmmakers from Robert Gardner to Trin Minh Ha.

DER board member, filmmaker, and curator, Ilisa Barbash and I introduced these important works and fielded discussion. We also moderated a panel with contemporary filmmakers Olivia Wyatt, Dominic Gagnon, and Turner Ross, who are working in, or in dialogue with, the ethnographic film tradition. It was immensely gratifying to meet filmmakers and cineastes young and old who were excited for a chance to see these works again after many years, or for the first time.

It was an honor to be part of CIFF’s programming in this rich and new way. We look forward to continuing the dialogue about ethnographic and documentary filmmaking, and to next year’s award nominees and winners!