Bringing “Elephant’s Dream” back to the Congo: An Interview with Filmmaker Kristof Bilsen 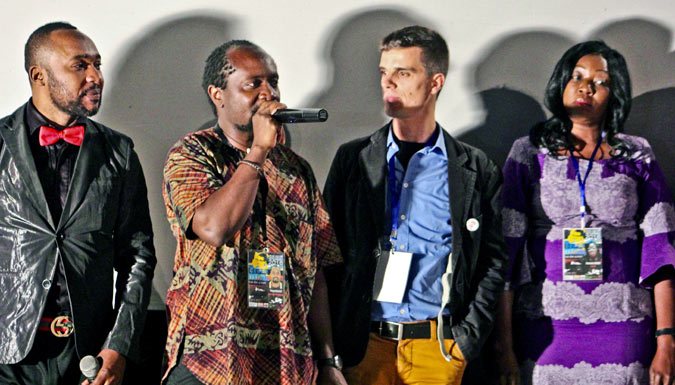 We knew Kristof Bilsen had been looking forward to bringing his film, Elephant’s Dream, to screen in the Democratic Republic of the Congo (DRC) where it was made. He finally had the opportunity to do so this summer. We caught up with him to learn how the screening went.

DER: Could you set the scene for us? When and where was the Democratic Republic of the Congo (DRC) screening? Who hosted? And who from your team attended?

Not only was I able to attend, but we managed to bring one of the leading characters of the film, Henriette (the post-office clerk), and flew her over from Kinshasa. My sound-recordist with whom I worked during the 4 years of making of the film was there as well. Not only was it the first opportunity to bring the film back to the Congolese community, it was also a premiere for Henriette to share her story with a big audience there in Goma.

DER: Who was in the audience and how was the film received?

KB: There were well over 600 audience members, both expats (but a minority) as well as Congolese filmmakers and locals. It was pretty impressive to be able to screen the film and have such a wonderful turnout. We screened in open-air on a courtyard of a hotel in the city centre and were invited for an elaborate Q&A afterwards. The biggest compliment? “Ahhh, vous êtes Congolais, vraiment, Papa!” In other words, we were praised for not going into the pitfall of portraying DRC as a country of war and turmoil. The audience really appreciated the poetry and the languidity of the film and the room for them to make up their own minds after watching the film. Several questions came from the audience, ranging from the contemporary issues of politics (in this 2016, one is still unsure if the long awaited elections in November will eventually take place, as Kabila is trying to cling on to power in various ways) to the hardship of the daily lives of state-workers.

People really appreciated the presence of musical heroes such as Tabu Ley Rochereau in the soundtrack and were intrigued by the way we managed to observe quite thoroughly the reality without interfering and still being able to “catch” underlying and universal issues of the Congolese reality, not being caught up in a Western gaze.

DER: Were the characters in the film present for the screening? And if so, (or if you have shown them the film in another context) how do they feel about the film and the representations of themselves? Did they see themselves or their nation differently as a result of viewing the film?

KB: We managed to get Henriette over from Kinshasa, and she was very proud and confident to show the film with us for a big audience. We did, however, show her the film at the same time as the world premiere in Fall 2014. Back then, our friend in Kinshasa met up with her and organized a private screening with her and simultaneously we were in touch via WhatsApp. Henriette was then able to respond to questions from the audience in DOK Leipzig. Her response was this: I do hope that a Western audience enjoys the qualities of the film, its pace and poetry, but also will be able to feel at least for a couple of minutes what we feel almost every day: being stuck in a harsh reality where one is obliged to take it on oneself to carry on, to instigate change, even if little. Henriette assured us that our approach of being aware of that problematic Western (even imperialistic) gaze proved successful: she praises the film and sees it as a huge force for introspection and hope. It’s a story that to her embodies the strength of the Congolese civil servants (and with them the Congolese people) and that within despair and frustration, there is a huge potential for empowerment by sharing these less sexy (read: warstruck) stories, too. In terms of representation, she also feels that the fact the film was able to travel widely on the festival circuit, it goes beyond the clichés of portraying Kinshasa and DRC as a war-torn country without any hope. Their resilience shows the contrary. The film made her and the audience much more aware of the scope of stories to be told about Congo. It made us realize how often we underestimate their insight in the medium.

DER: Do the audiences in DRC see the film as optimistic or pessimistic about the future of DRC?

KB: I feel it’s either one or the other: they see it as a genuine portrayal of DRC and specifically of the State. For once they see a film that carefully developed a language on its own, a way to get insight into the daily lives without focusing too much on the Kafkaian or tragic, without being lost in anecdotes of hardship. The different responses were positive and grateful. But as we speak, there is a wider conscience of the influence of the State and the oppression it embodies by not allowing change in depth. On a superficial level, they do see changes (new roads, airports, business deals and opportunities) but on a deeper level, they hunger for a mental change and consciousness to finally respect the need for fair elections and representation. And with that, they do realize that the decade-long influence of foreign powers (be it in the past by the troubled Belgian Colonial Rule and the contemporary Rule of dealings with multinationals, the UN and so on) needs to be redefined and there is a huge will to take the future into their own hands. New youth initiatives of peaceful protest such as LUCHA and FILIMBI are exemplary for a new (and hopefully successful) wave of consciousness that doesn’t just accept the decade long rule of foreign and national power. They are ready and keen to shift the tables. But I would hope it will not need any bloodshed.

Also we have been teaching in the context of the festival, through Yolé Africa, where we met countless young filmmakers who are more than ready to take on these alternative stories and share them through festivals, new and online media and who are keen to form alliances with peers worldwide.

KB: There absolutely is a network of filmmakers and this is in docs and animation and narrative. Sadly (as anywhere in the world these days) the funding for independent films is scarce and due to the government, there really is not a healthy public funding or screening network in place for cinema. However, the resilience of the new generation shows a need and an increasing energy to make change happen. Yolé Africa initiative is but one example, the various little film festivals in Kinshasa another, but generally one should really keep an eye on what is happening in DRC in terms of independent cinema.