DER50: Directions in Documentary Sound at the Harvard Art Museums 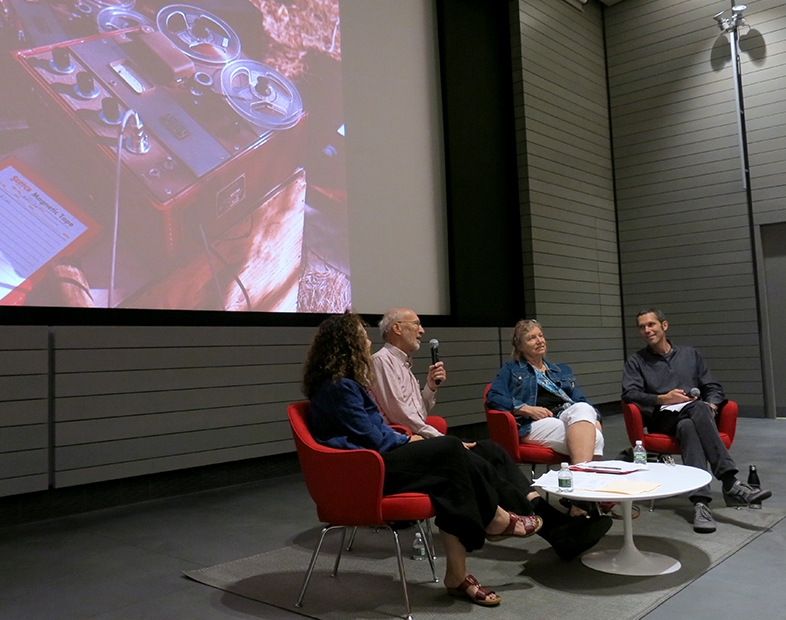 Films are often guided by what is seen, leaving sound as only a compliment to the visual experience. The new frameworks of “sounded anthropology” are attempting to change that, especially in terms of the theoretical development and analysis of ethnographic film. Directions began with a simple presentation: with the lights turned off in the auditorium, audio excerpts from well-known DER films were played over the sound system. Event attendees, hearing familiar sounds of birds chirping, children laughing, a saw moving through a tree, took a moment to contemplate the sound on its own.

Moderated by Lisa Barbash, curator of visual anthropology at the Harvard Peabody Museum, the discussion panel that followed was comprised of well known documentary sound artists and filmmakers Stuart Cody, Sarah Elder, and Ernst Karel. Stuart Cody, who started developing audio and battery systems for working in the field in the 1960’s, offered insights into 50 years of changing field recording technologies, as well as his own experiences working with Cambridge filmmakers such as John Marshall and Robert Gardner. Sarah Elder reflected on her experiences largely in the 1980’s as co-director, sound recordist, and editor on the Alaskan Eskimo series, in which she embraced the new possibilities of sync sound to give voice to her indigenous subjects. Sound artist Ernst Karel offered insights into the history of poetic and non-synchronous sound approaches which have shaped his own experimental soundwork and emphasized soundscapes rather than the human voice on films such as Sweetgrass, Leviathan, and Manakamana. Clips from DER films such as N/um Tchai, The Nuer, and the Alaskan Eskimo series, served as jumping off points for discussion of the many approaches to sound in ethnographic film and documentary history.

I found scenes from John Marshall’s N/um Tchai to be of particular interest. Despite being filmed prior to the invention of sync sound technology, Marshall managed to create a cohesive and balanced depiction of the Ju/’hoan trance and dance ritual. For such an intense and multi-sensory experience, it was almost beneficial to not have sync sound; without it, the film and sound recordists were able to capture various sounds and sights independently, rather than being tied to a single, static viewpoint. I think it’s important to note that in this freedom, there is both independent agency and a larger responsibility for what is being filmed. Though it is stated outright in the beginning of the film that its sound was reconstructed during editing, we trust that the filmmakers have made a film that is reflective of the real experience being depicted on screen. I can imagine that working with such varied audio and choosing to forego narration only made this process more difficult; still, John and his crew succeeded in doing so, and made expert use of unsynchronized sound when it very well could have been a disadvantage. N/um Tchai astounds me as a product of the 50’s and 60’s; and I’m grateful that John made the film the way he did. It certainly set the mark for future DER films. 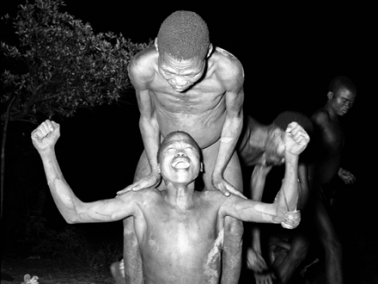 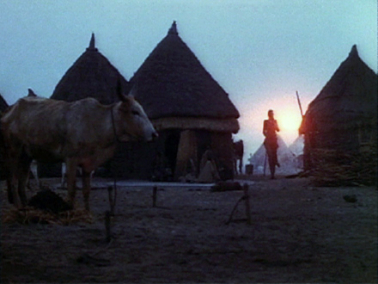 Still from The Nuer

In Barbash’s words, the layered sound mixing in The Nuer creates “the sense of an entire world”, albeit in very different ways than N/um Tchai. I really admire Harris and Gardner’s poetic film-making approach in this film, which makes use of montages and multiple soundtracks. For me, these techniques really aid in the immersion of the scene, despite the fact that the film skips back and forth between sync and non-sync sound. The work and song montage depicted in the second Nuer clip is mesmerizing, and I think a lot of that really comes from the disconnect between what we see on screen and what is heard. Just as with N/um Tchai, Harris and Gardner were given the opportunity, through non-sync sound, to create a soundscape to drive this particular scene. Where Marshall sought to replicate the real-time sounds of the trance and dance ritual, it seems like Harris and Gardner deliberately created a dissonance, in some moments allowing distant sound to altogether take over. Ultimately, I think The Nuer features great experimental sound composition that opened doors for later ethnographic films to engage with sound in unique and unconventional ways. It’s a beautiful film that shines as one of the more artistically-driven ethnographies housed at DER.

Elder’s Alaskan Eskimo series has long been regarded as a highlight of DER’s collection, but it was truly refreshing to analyze the films from the perspective of sound. I was really taken by Elder’s anecdote of when she approached community members with the idea of filming in the dance house: 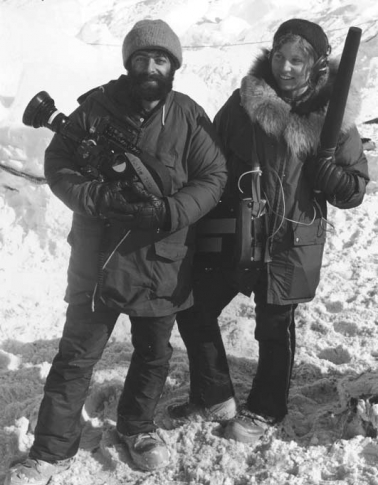 Kamerling and Elder filming of DRUMS OF WINTER

Uksuum Cauyai (Drums of Winter) set a new precedent for how ethnographic film should address the perspectives of non-western peoples. Elder let the filming process be guided by the community, recording all sorts of music and conversation, to create narrative for the film that gave primary voice to the people of Emmonak. Though we should absolutely applaud the skill and innovation of sound recording in the film, Drums of Winter resonates as proof of what sound in ethnographic film can do for cultural preservation. Because of the collaboration between Elder and the Yu’pik community, there are now 250 hours of digitized audio preserved for future remembrance and learning. Being both culturally sensitive and technically skilled to create a balanced soundscape of intimate conversations and powerful song and music is no small task. Elder, too, faced the dichotomy of individual agency and responsibility to the community, and I think Drums of Winter provides a perfect example of what a balance between the two looks like. 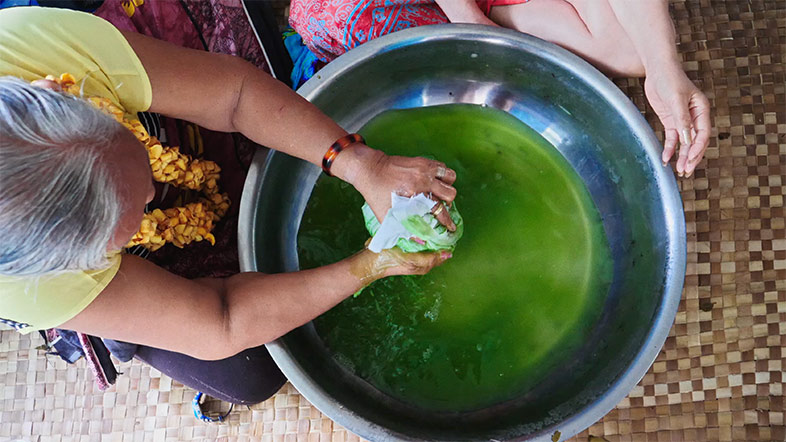