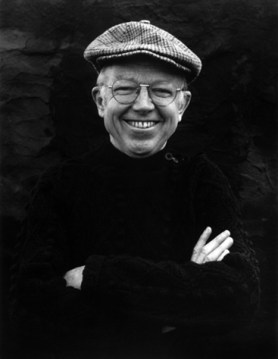 DER was saddened to learn of the passing of George Stoney last week at his home. As a documentary filmmaker, activist, and educator, George’s films helped make visible the lives of many individuals who would have otherwise remained unseen. He has been called the father of public access, having provided an opportunity for people of all walks of life to use the media for personal expression. He was also a founding member of Working Films, where he promoted the use of film for social good.

Over his long career, George’s films, often focusing on social change, included works made for the American Cancer Society, the Ford Foundation, Planned Parenthood, and the National Film Board of Canada – where he was Director of the Challenge for Change project from 1968 to 1970. George’s films followed subjects ranging from African-American midwives in All My Babies to indigenous people struggling over land rights in You Are on Indian Land. More than anyone, George saw documentaries and documentary filmmaking as part of the social fabric. In How the Myth Was Made, he examined the long-term impact of Robert Flaherty’s Man of Aran on the community in Ireland’s Aran Islands.

In 2009, DER was honored to begin working with George as a keeper of his collection. Sorting out rights holders and finding good quality masters has been a challenge, but we are proud to have over a dozen of his films now available on DVD, including several titles that were previously out of circulation. We will continue to make additional titles available.

On a personal note, I was one of George’s students at NYU – one of many, many students in the Documentary Traditions class at NYU. He was a wonderful teacher; he had an encyclopedic knowledge of documentary and, even more remarkably, seemed to know personally all of the filmmakers of note. He delighted in juxtaposing different approaches to a film topic, which informs the way I experience films to this day.

We remember George, and we look forward to ensuring his legacy lives on by making his films available to a wide public.