Get to know DER better in December! Spotlight on Curation & Distribution

By DER|Tags:Get to Know DER 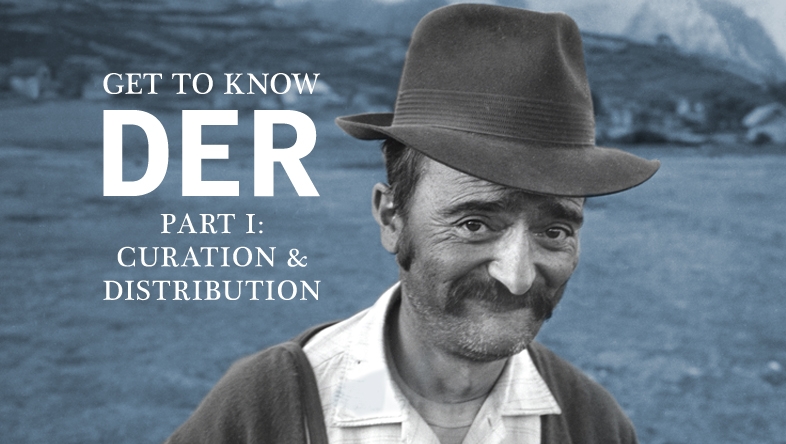 You may know DER as a film distributor, but this December we’d like to show you that we’re so much more! DER is a 501(c)(3) non-profit aiming to foster community, challenge preconceptions, and safeguard our diverse cultural memory through media; 2015 has been our best year yet! This month, we’ll be spotlighting our new programs and achievements in Curation & Distribution, Production & Production Support, and Collection Management & Preservation. We hope learning more about the work we do will inspire you to make a tax-deductible donation so we can do even more in 2016!

Part I: Spotlight on Curation & Distribution
This and every year, we curate a selection of new films to add to our collection. We support films that prioritize underrepresented voices, explore contemporary cultural struggles and artistic traditions, and offer longitudinal views of changing communities, cultures, and identities. We’re committed to informing future filmmakers of the history of this work, and supporting productions for teaching cultural literacy to a new generation of global citizens.

– sponsored over 50 free community screenings around the world, from Romania to Alabama.

– helped coordinate screenings – in video, 16mm and 35mm formats – at museums such as the Freiburg Museum of Contemporary Art, art house theatres such as Anthology Film Archives, and festivals such as the Taiwan International Ethnographic Film Festival.

– made important documentary works available in the US and over 70 countries to educators, students, researchers and curators through DVD and streaming options.

– brought Director Karim Haroun to Boston from Montreal for a free screening of his film Mystic Mass. The film has screened at festivals such as RIDM and Visions du Reel, and is an important contribution to the discussion of Islam in media. The screening was followed by a lively discussion between Karim, film and Middle East scholars, and the audience.

I first heard of DER after watching a clip of a Gardner film at the Musée du Quai Branly. I immediately knew my documentary Mystic Mass would be in good hands with them, and I wasn’t wrong. From the first meeting in Montreal to the DVD release in Boston, our relationship has been based on trust and friendship and this is all for the benefit of the film. — Karim Haroun

Hear more from Karim about his film and process on the DER podcast.

Your contribution helps us share even more films, like Karim’s, that spark important conversations and help us understand one another better.

Thank you for your support!