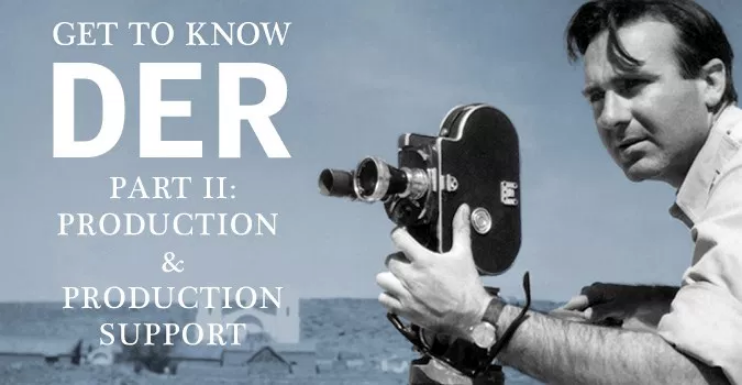 Welcome to our Spotlight on Production & Production Support, part two in our series to help you get to know DER better this December!

Through our Production & Production Support programs, DER serves as fiscal sponsors, consultants, and executive producers on important projects being made in the Boston area and beyond; and we initiate activities to bring awareness to new ethnographic and documentary media achievements. With your help, we can expand our programs and better support documentary filmmaking in 2016!

– initiated a new Executive Producing program! Available to select projects that meet our mission, we play an active role as creative producers and decision makers. DER’s 2015 Executive Production projects in the works include:

– Headhunt Revisited: With Brush, Canvas And Camera, dir. Michele Westmorland. A feature-length documentary about artist Caroline Mytinger that explores the role of art in documenting cultures and complexities of ethical cultural representation.

“I was in search of a fiscal sponsor who would be engaged with my film Headhunt Revisited – and then I discovered DER. I think the best part of becoming one of DER’s projects was the their ability to collaborate and provide support in grant applications, distribution outlets and guidance in bringing the film out to the right audiences. The entire team at DER, especially Alice Apley, has been a key ingredient to the momentum in completing this production. I look forward to our continued relationship.” – Michele Westmorland, director, Headhunt Revisited

– supported the following fiscal sponsorship projects through to completion:

Congratulations to all our fiscal sponsorees!

– launched the John Marshall Award for Contemporary Ethnographic Media! We presented the award to Anna Roussillon’s film I AM THE PEOPLE at the Camden International Film Festival in September, and are pleased to announce DER will be releasing the film in 2016!

“DER has been a longstanding supporter of the Camden International Film Festival and Points North Documentary Forum, playing a critical role in the development of our Points North Pitch Award for early-career filmmakers. This year we had the wonderful pleasure of expanding our partnership, as we introduced the first annual John Marshall Award for Contemporary Ethnographic Media. DER’s legacy of championing ethnographic film, and their vision of where the form is going make them a wonderful partner for this award, and we’re honored to partner to highlight new voices in ethnographic documentary media.” – Ben Fowlie, Founder & Executive Director, Camden International Film Festival

Help us expand our programs and better support ethnographic and documentary filmmakers in 2016! Your tax deductible donation means so much to us and the independent filmmaking community. We are so grateful for your support!