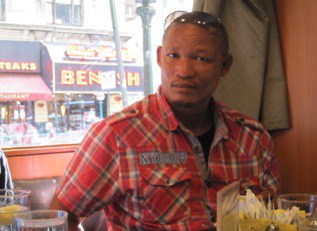 Oma (Leon) Tsamxao — grandson of Toma Tsamxao, whose extended family is at the center of John Marshall’s Kalahari films (including A Kalahari Family, The Hunters, and others) — was recently at the United Nations to participate in the 11th Session of the United Nations Permanent Forum on Indigenous Issues (UNPFII). Oma had traveled to NYC as part of the San caucus of southern Africa, the first time representatives of San communities from the region had stood together as a collective group to speak on behalf of the rights of indigenous Africans. In a statement presented by Job Morris of Botswana, the San rejected the doctrine of discovery, and called for the national governments and regional, continental and international bodies to recognize their unique relationship to the environment and rights to land. The visit was documented by the Open Society Initiative for Southern Africa (OSISA). Check out their website for links to the Statement by the San Caucus to UN Permanent Forum on Indigenous Issues and Statement by the Indigenous Peoples of Africa Coordinating Committee to the UNPFII.

I met up with Oma and his colleagues from southern Africa the day after the meeting to hear about their experiences and for a bit of sightseeing. As we made our way past Ground Zero, across the Brooklyn Bridge, and through Chinatown, they shared their delight with the reception they had received and new contacts they made with indigenous people from around the globe; they were moved to learn that many of these groups were dealing with similar issues related to land, food security and water rights. They told me as well that the San in southern Africa had not previously worked across national borders. The experience of traveling together and standing as a single southern African caucus was an important one, and appeared to be the beginnings of a new collaboration.