“On the Matter of Film” published in Anthropology Now 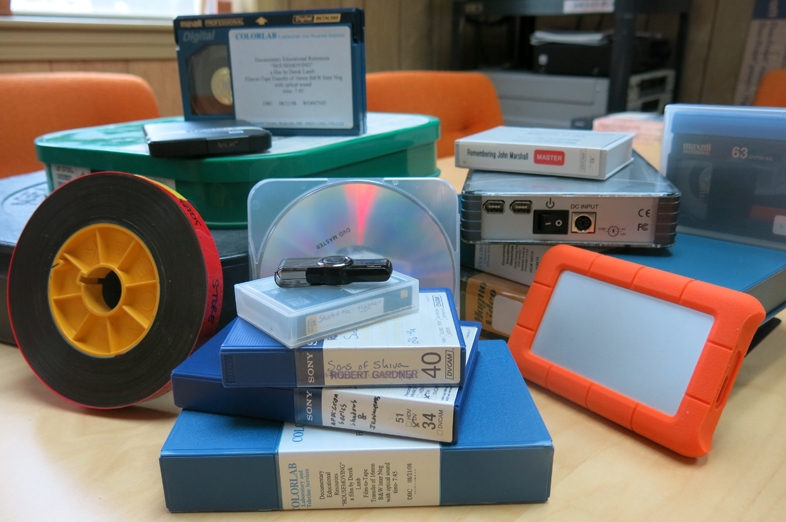 An assortment of film and video materials from the DER archive. Photo by Frank Aveni

This September, DER’s Executive Director, Alice Apley, had her article on DER’s important, and ever-changing, role in film preservation published in Anthropology Now. An excerpt from Alice’s article, “On The Matter of Film,” can be found below:

“As film making and viewing increasingly become identified with digital media—storage in bits and invisible streams that manifest as cinematic experiences in our classrooms, theaters and living rooms—it is easy to lose track of the concrete materials, processes and spaces that make these viewing experiences possible. Easy, that is, unless your job requires exactly that, keeping track of the many and varied materials that exist behind the scenes of a large and growing film catalogue. This has been one aspect of my job since 2011, when I started at Documentary Educational Resources (DER), one of the most historically important resources for ethnographic film in the world today. I started with the belief that my role would be to bring DER into the age of digital, networked media and I was quickly drawn into another world entirely. It is a world of 16mm and 35mm film elements in cans—camera originals, pre-print materials, and projection-ready distribution prints—sound recordings, production logs, journals and tape masters in every format imaginable.

The DER catalogue includes over 850 titles, spanning nearly 100 years. Most notable is a body of ethnographic films made between the 1950s and 1980s, significant for establishing the field of ethnographic film, and including classics such as N!ai: The Story of a !Kung Woman, The Ax Fight, and Dead Birds. While best understood today as historical documents rather than films of contemporary cultures, many continue to be used extensively in the classroom. For instance, in the fall 2016 semester, N!ai was “played” 2712 times on just one of multiple streaming platforms, a count that doesn’t include classroom and library viewing on DVD. In addition to these “classic” ethnographic films, shot largely on film, we have a growing collection of works shot on various digital formats, such as Poto Mitan: Pillars of the Global Economy, (un)veiled: Muslim Women Talk About Hijab, Framing the Other, and Stori Tumbuna: Ancestors’ Tales, which have also become mainstays of college teaching. And each year we add approximately twenty new titles to our offerings, reflecting the work of filmmakers and anthropologists who have carried this tradition forward and applied it to contemporary social issues and events. For each film we distribute, DER maintains master materials – that may be an original version of the film made on celluloid now held in an archive, a tape master or a digital file.

Each film offers an irreplaceable window into culture and history, valuable not only for students and researchers, but also for descendants of the communities whose lives are documented. A value recognized for instance by the 2009 induction of John Marshall’s 50-year film record of the Ju/’hoansi bushmen into the UNESCO Memory of the World Register. The outtakes, unreleased cuts, and ancillary materials that DER and our partner institutions hold for many films are resources for understanding the origins of the field and informing contemporary scholarship and production. The DER archive provides a foundation for understanding the tradition of ethnographic media production, distribution and education and extending the practice into the 21st century. To keep these films available in high quality over many decades requires considerable time and effort, as well as access to expertise in archiving, contemporary and historical production processes and forms.”