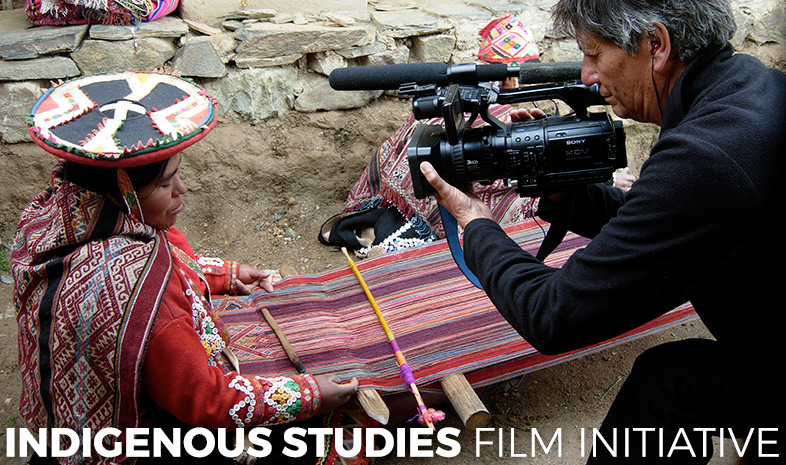 We’ve just completed the first phases related to re-imagining the presentation of Indigenous content on our website which was inspired by our review of contemporary Indigenous archiving standards. This includes an Interactive Film Map highlighting the relationships of communities to their ancestral lands and an Index of Culture Groups that updates earlier culture group names with the contemporary names preferred by the communities themselves. Our newest addition to facilitate browsing our catalog is the completion of a set of subject categories on our website to facilitate the identification of titles of interest to Indigenous communities and those seeking films about Indigenous Studies.

One of the first challenges faced in doing this work was identifying which of the films in DER’s catalog were relevant to this project, bringing to the fore the complexity of how to define what is an Indigenous community or determining who identifies as an Indigenous person. 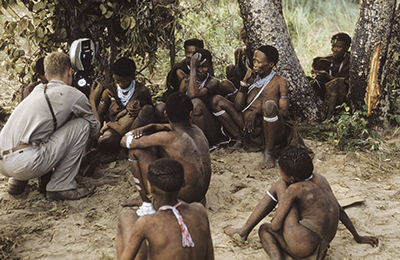 John Marshall filming a Ju/hoan woman with her child

We realized that while these definitions are readily applied in situations of settler colonialism, other geographies with more complex histories of intermingling different people and communities make it harder to distinguish. For instance, the various Native American groups in North and South America, along with aboriginal Australians – are readily identified as Indigenous. Also easy to identify as “Indigenous” are groups such as the Ju/hoansi in Africa.

Other groups we have in our collection, such as the Tibetans, have a bit more complexity in how they view their relationship to the concept of indigeneity. Further, while dictionary definitions define indigeneity as original or naturally occurring in a particular place, in effect, the term has been politicized, and it is not always clear who wants to be identified as such.

Ultimately, we looked to the United Nations Declaration on the Rights of Indigenous Peoples, adopted in 2007, and then to Cultural Survival’s definition as a means to cross-reference one another so that we can feel confident choosing which particular group to include. The Cultural Survival definition seemed particularly useful as it highlights some of the commonalities in the experiences of Indigenous groups around the globe.

In the end, we also felt we weren’t the ultimate authority on the subject, so we wished to err on the side of inclusivity. Our hope is that conversations and outreach down the road will bring about engaging perspectives on the matter and provide greater insight into the issue.

Selecting the proper terminology to include in the Culture Group Index presented another set of challenges for our global collection. For one, we had to make a decision as to what to call the communities at large.

Among Indigenous groups in the United States, the widely used term “tribe” is tolerated, though not whole-heartedly embraced. As a historical term, according to an article in Indian Country Today, the legacy and bureaucratic use of the term was implemented by US policy makers as a way to diminish the organizational structures of the communities.

In Africa, the term is generally derided as a construct of the colonial mind-set whose dehumanization of the people on the continent is very well connected to the image of the “savage” and its connection to the idea of “tribes.” In Canada, the term is generally not used. Instead, they opt for Aboriginal or First Nations, depending on which community one is referring to. Regardless, outside of Canada those appellations may not resonate.

With these differences between perspectives from continent to continent, we chose to call the communities in our collection a more neutral term that transcends localization: Culture Group.

Our approach to naming individual communities was to offer contemporary alternatives to the legacy terms applied by colonial entities or other culture groups that are now viewed as outdated, offensive or even derogatory. Some of these exonymous terms are well-known and widely used.

Through our work, we wished to establish a protocol that would give precedent to the names the communities wished to be called. The Huni Kuin in South America depicted in the Video in the Villages film collection are a fine example of this. The name Huni Kuin is a self-denomination and means “true people” or “people with traditions”. 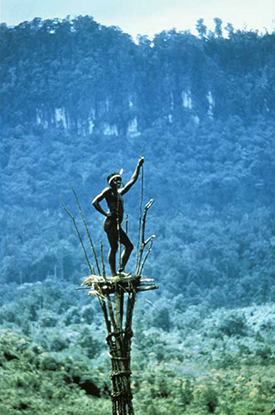 As another example, the people documented in Robert Gardner’s seminal work Dead Birds have commonly been referred to as the Dani, a name that was given to them by a neighboring group and entered into popular usage with the 1926 Smithsonian Institution-Dutch Colonial Government expedition to New Guinea. Today, as far as we know, their preferred self-identification is Hubula.

By explaining the historical legacy of these exonymous terms through our descriptive blurbs and adding them to our metadata keywords, we are placing them alongside the preferred self-denominations. The objective is to bridge the gap between outdated sensibilities and contemporary, preferred terminology to ensure ease in finding and identifying films relevant to a particular community regardless of which angle the would-be searcher is arriving from. Most important, it is also so that the communities are represented using the terms with which they self-identify.

We are not here to rewrite history. By choosing inclusion instead of erasure, we are able to make our films more accessible while also giving an arc of history to how communities are able to take back their names in an act of self-determination. 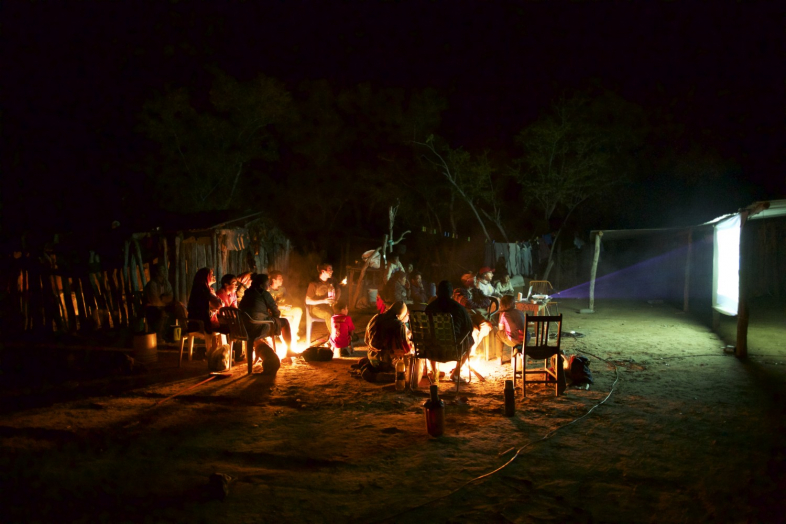 Having completed these first tasks, we’ve been reaching out to filmmakers for their feedback on the work accomplished thus far. The response has been overwhelmingly positive. Selma Thomas says “I applaud your efforts.” Patsy Asch calls it a “timely initiative.” Many others echoed similar sentiments.

For some filmmakers, the response wasn’t about the importance of our initiative. Rather they took the opportunity to reflect on their own work. In one lively exchange, Lucas Bessire asked that we remove from distribution his two films about the Ayoreo, From Honey to Ashes and Asking Ayahai, respectively. As he explained, “I made both of my DER films very long ago, when I was a student… Given the new initiative, it seems like a good moment to open a conversation about removing my films from further distribution. I believe that doing so would open more space for their own work to gain visibility.” As part of his prompting, the Ayoreo are now making their own films, which he felt would be more important to promote in their journey to cinematic sovereignty.

Not surprisingly, we got some push back about our application of the term “Indigenous”.  Rina Sherman, one of our featured filmmakers, asked that we remove her films from being included in the initiative. In her latest blog post she explains her stance that “working with people, based on their lives, their reality, is a complex, dangerous and at times trying endeavour. Nothing is ever entirely clear nor fixed… I have long stopped referring to people in relation to their origins, or providing information about people’s origins when I present them or speak of them. For the simple reason that it eliminates prejudice in the perception of what is being said…in the same way, I avoid in general speech terms such as ‘tribe’ or ‘indigenous’.”

It is engagement such as these that make counterpoints so valuable to our process. While understanding her perspective and agreeing with aspects in principle, we also recognize that for many communities identifying as Indigenous is a right of self-determination. It also positions them in a larger international political community, giving exposure to their experiences and engendering a greater understanding of people inflicted by colonial legacies. Though we recognize that these terms will continue to evolve and change, and that furthermore there are often new terms that mean the same thing, it doesn’t mean that as terms change perceptions will not. One could argue that it is this process of naming and identifying that brings about a new collective understanding to the history of communities that consider themselves Indigenous.

Stay tuned as we explore additional ways to confront the colonial heritage of many of our films, and to open up new dialogue with the filmmakers and more importantly the individuals and communities at the center of these films. We continue to believe that these works serve as valuable resources for engaging community members in telling their own stories and writing their own narratives. 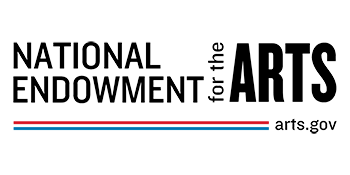 This project is supported by an award from the National Endowment for the Arts.

To find out more about how National Endowment for the Arts grants impact individuals and communities, visit www.arts.gov.